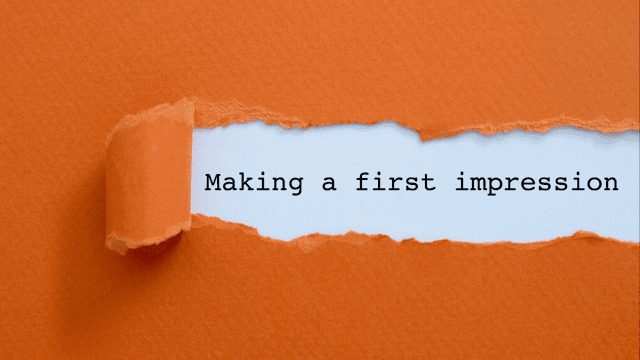 How good are you at first impressions? Here are important tips and advice to keep in mind the next time you’re meeting someone new.

When we meet someone for the first time, we often worry “Is this person going to like me or not?”

First impressions are a big deal for most people. We want to make a good impression during job interviews, first dates, or business meetings because we know that they can often paint the rest of our social interactions with that person.

A lot of our initial perception is shaped by how people look, how they act and talk, and how they dress and present themselves overall. If a person walks into a job interview with disheveled hair, ripped clothes, and a nonchalant attitude, an employer is going to reasonably suspect that this person may be unqualified, lazy, or unreliable.

We can’t ignore the power of first impressions. While it can seem superficial to judge someone based on how they look or act within a couple minutes, these snapshot judgments are a simple fact of human psychology.

Fortunately, there are positive steps we can take to build the best first impression possible. Here are the key things to keep in mind.

At the end of the day, it’s important to be yourself – the advice and suggestions above are just a way to present yourself in the best way possible.

First impressions are sticky, but they aren’t set in stone. If someone rubs us the wrong way when we first meet them, that can be a difficult perception to shake off, but it’s not impossible.

One fascinating study published in the journal Human Relations shows that initial perceptions of trustworthiness can have a long-lasting impact on subsequent social interactions, so much so that we overlook future trust violations.

However, even a bad first impression can be overcome if a person proves themselves to be more likable and trustworthy in the future.

In the same study, people that initially got off on the wrong foot but later showed trustworthiness in a later interaction were actually seen to be most trustworthy of all. Everyone loves a good redemption arc.

Making a good first impression is important, but creating a positive lasting impression is what really matters. You must sometimes give yourself a little extra time and patience to prove yourself.

The same goes for your first impressions of other people.

Keep in mind that you’re only getting a quick snapshot of who someone really is in a short period of time, but it’s often best to give people the benefit of the doubt and allow them to show a more positive side of themselves the next time you see them.

Perhaps you just met them on a bad day – or they were socially anxious about meeting you and accidentally sabotaged themselves.

To overcome a bad first impression, you have to be willing to let bygones be bygones and start every social interaction on a clean slate.

We are all human, never underestimate your ability to connect with someone on a genuine level, even if it happens to take a little extra time or effort.